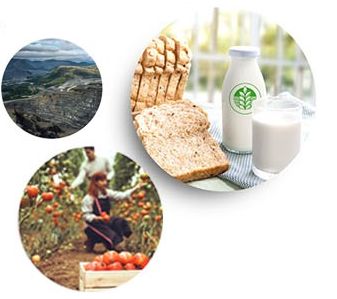 The Green Label project (ecolabelling for mineral fertilizers) is a sign developed and proposed by the Russian Association of Fertilizer Producers carrying the following principles:

The “Green Standard” / “Green One” ecolabelling was developed within the framework of the Federal Law of the Russian Federation on agriculture produce, raw materials and food with improved environmental image.

The following can be certified with ecolabelling:

The new Russian GOST for mineral fertilizers sets more stringent requirements than those accepted in the European Union.

It is important to note that Russian ditizone methods for mineral fertilizers are harmonized with those currently accepted in the EU.

Agricultural products grown on contaminated with toxic contaminants lands lead to the accumulation of heavy metals in the human body. The prolonged exposure to Cd, Pb, As, Cr and Hg affects the skin, bones, functioning of the organs and nervous system as well as contributes to the development of cancer. According to the World Health Organization, about 200,000 people die every year from chemical poisoning, including heavy metal poisoning.

A study by scientists at Harvard reports a three times increase of a risk of children's inability to learn if they were exposed to a higher level of cadmium exposure. A study by the FDA (U.S. Food and Drug Administration) conducted in 2019 showed that cadmium levels in food products exceed levels safe for children. During the course of tests of food baskets in 2014–2016 the FDA found cadmium in 65% of the nearly 3,000 food samples tested and estimated that the average exposure to children exceeded safe limits.

The French Agency of Sanitary Environmental Security (ANSES) has published recommendations for reducing cadmium levels in fertilizers. The cadmium content in phosphate fertilizers should not exceed 20 mg/kg P2O5. It has a critical importance for the reduction of the rate of cadmium accumulation in soils and its intrusion into crops, surface, and subterranean waters. The imposition of limitations will increase the protection of population exposed to cadmium through food products.